You’re offline. This is a read only version of the page.
Antyxsoft Cloud

How to configure outbound call routing in 3CX

Configuring Outbound Rules on 3CX Phone System is a very simple affair if you have a single device or service which you deliver calls with – in most cases a single rule will be enough.

But the Outbound Rules in 3CX Phone System allows you to create much more complex rules – allowing you to not only select backup routes which come into effect when other routes fail, but also to select a different set of routes, depending on the type of number being dialled.

For the sake of this example, we will assume that our PBX: 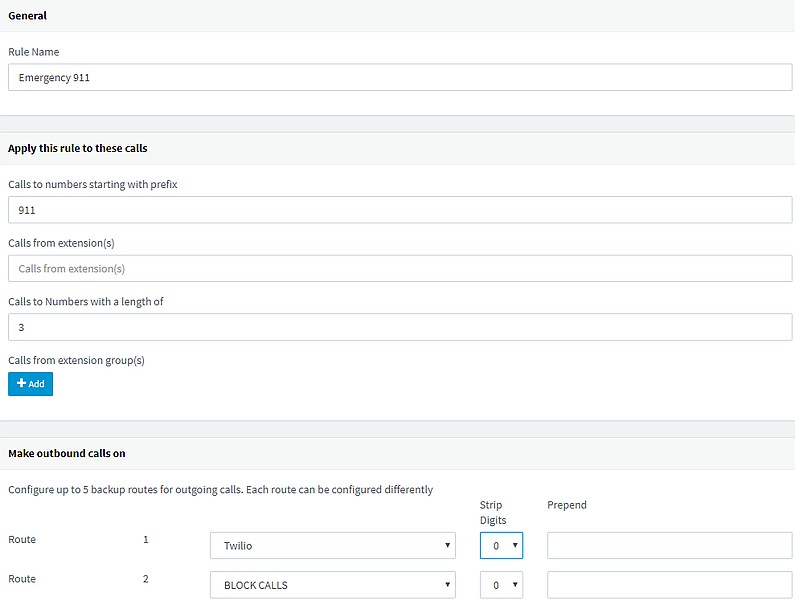 Probably the best way to handle the “911” Emergency Number is to start with it. First we should create an outbound rule to handle such calls:

Specifying a prefix which has 3 digits, and restricting the rule to numbers which are 3 digits long, effectively creates a rule for only the number in the prefix field – in this case, “911”. 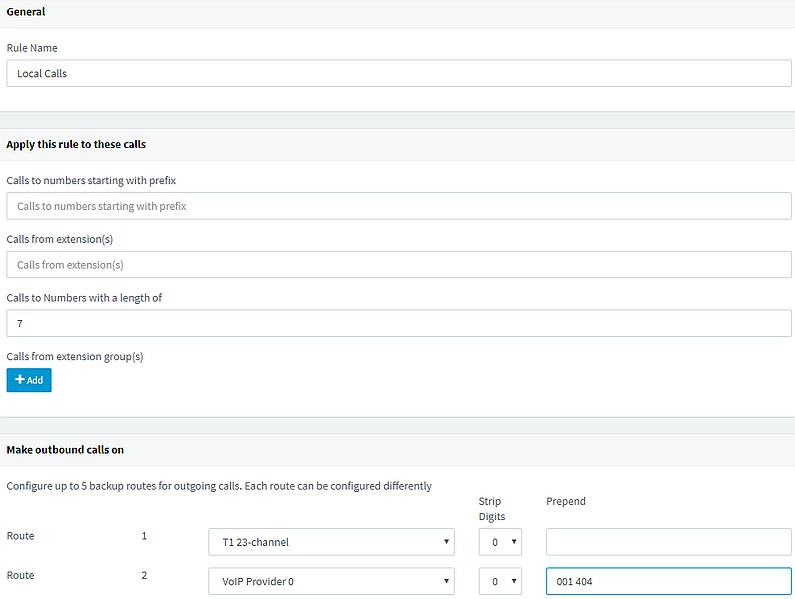 Here, we have specified a backup route (in case the primary route is unavailable or fully occupied) via the VoIP Provider account.

Since the VoIP Provider we are using requires us to present the destination number in full international format, we will need to prepend “001404” to the dialled number.

Local Calls Dialled in Other Formats

Sometimes a user may dial a local number in long distance or international format – possibly because he initiates the call from Microsoft Outlook, or some other TAPI-capable CRM application. You may wish to create a custom rule to also catch these calls, and ensure that the outbound rules route the call as intended even in these cases. 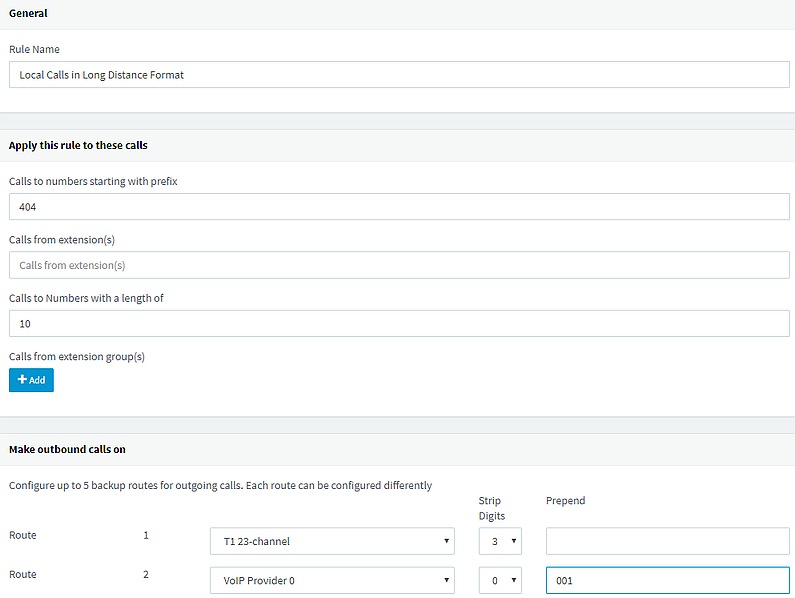 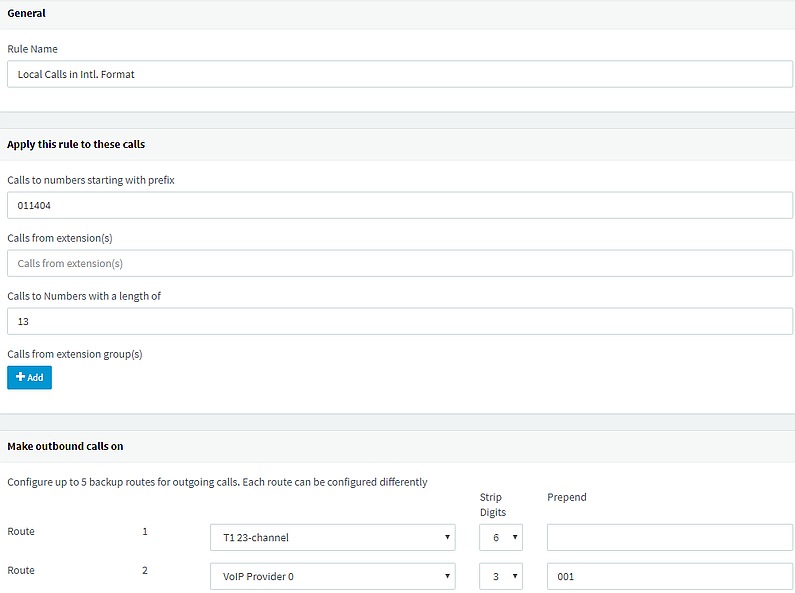 To capture a call destined to a long distance number, we need to specify a rule that catches dialled numbers which are 10 digits in length if the caller omits the leading “1”: 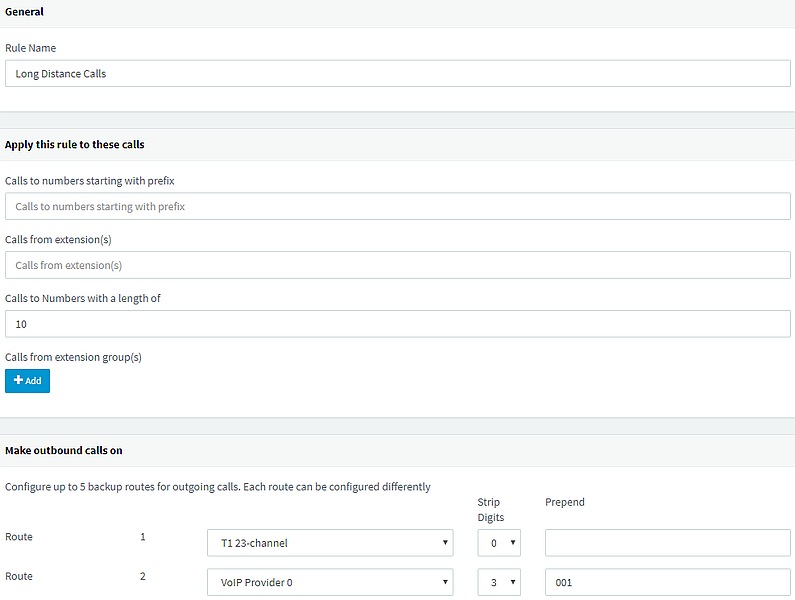 …and also a rule that catches dialled numbers which are 11 digits in length and start with “1”: 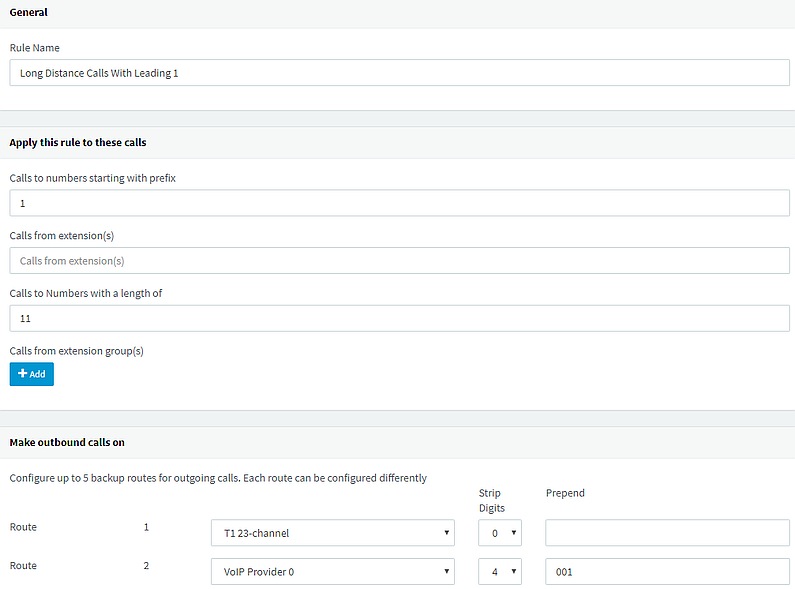 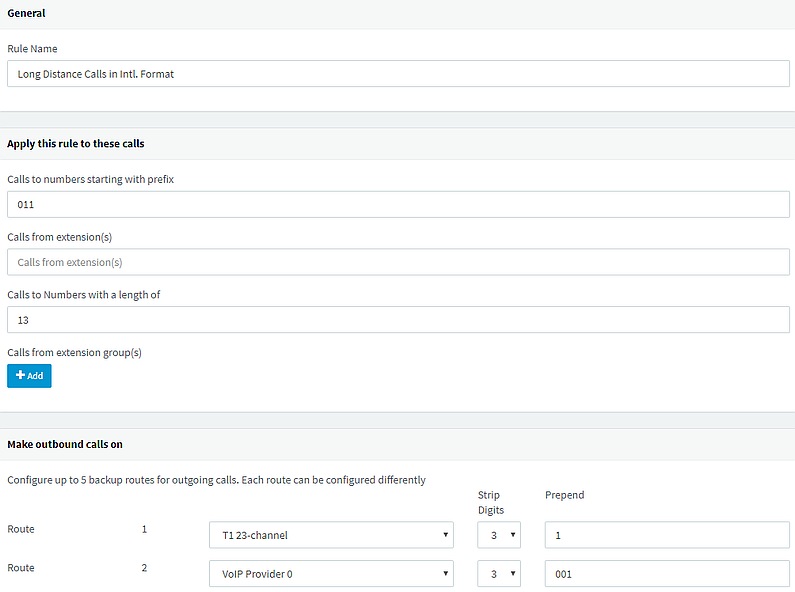 To capture a call destined to an international number, we need to specify a rule that catches dialled numbers which start with “011”: 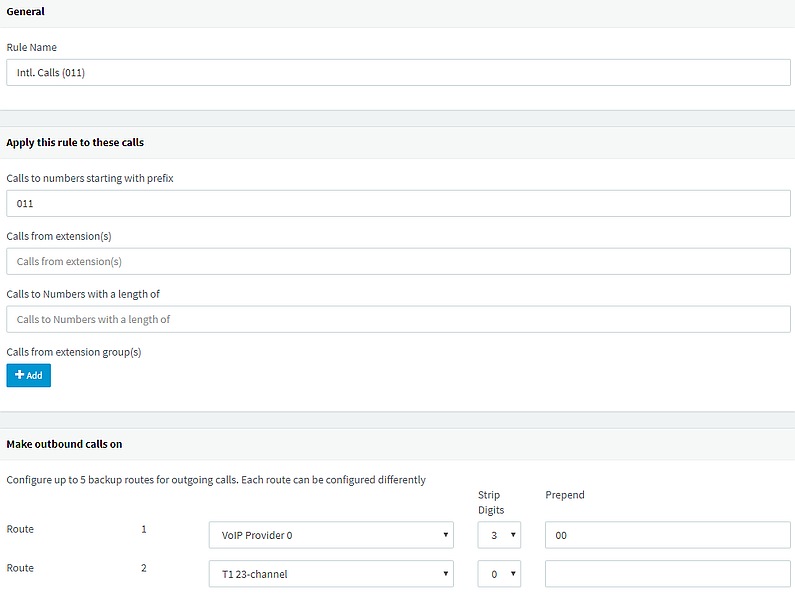 It may also be necessary to capture calls dialled to international numbers starting with “00”: 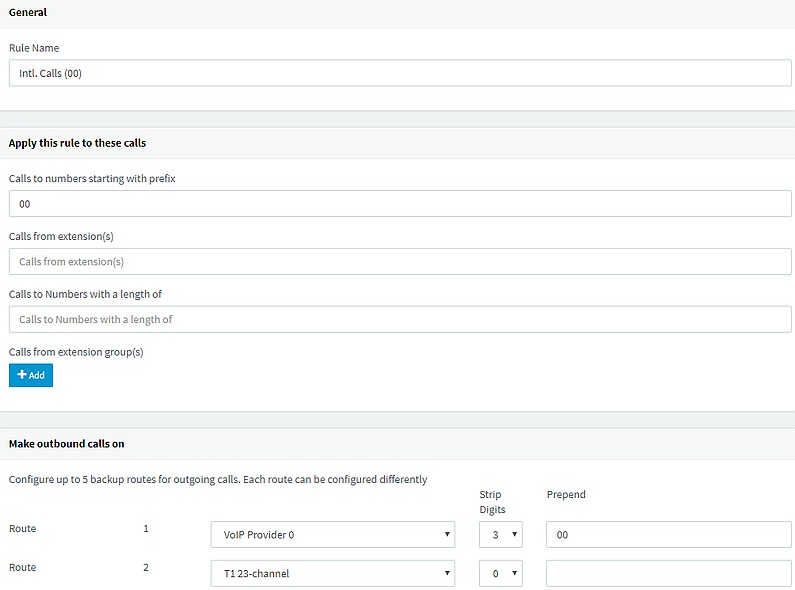 Bridge Calls to Extensions on the Remote PBX

To reach extensions on a remote bridged PBX, we need to choose how we want our users to dial numbers.

On the LOCAL PBX, we need to create a rule that catches calls to the REMOTE PBX’s Extension Numbers: 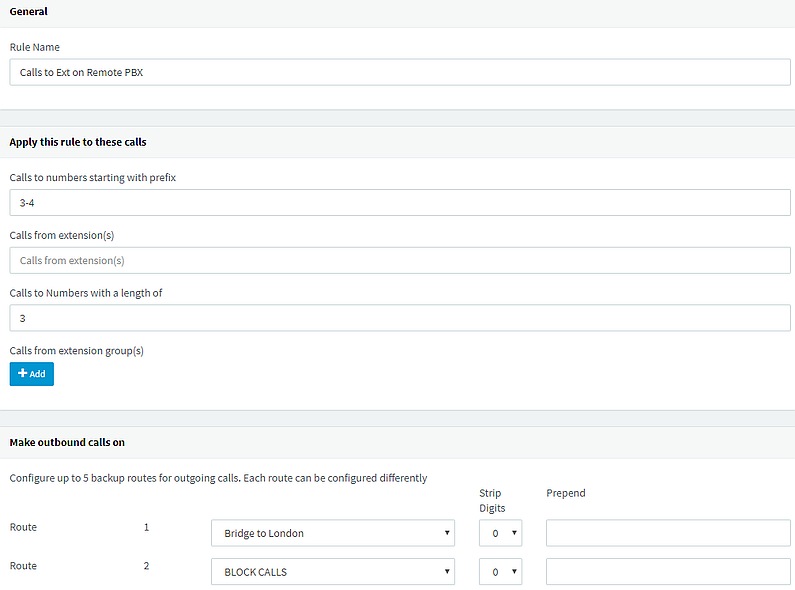 With this option, users will need to dial a 4-digit number to reach extensions on the REMOTE PBX, but it does give us the flexibility to use the same extension number for different people on both sides of the bridge.

To achieve this, we will need to dedicate a prefix (for this example “6”) used to reach extensions on the REMOTE PBX, and create an outbound rule to catch such dialled numbers, taking care to strip the leading “6” before delivering the call to the REMOTE PBX: 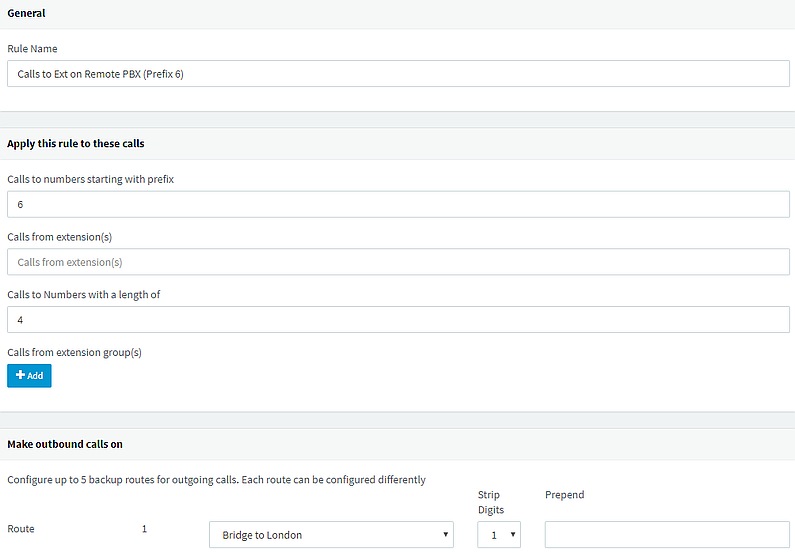 Most people find this to be a far simpler way of handling the situation – but it is a question of personal preference. The rest of the examples presented here will build on this.

Exploiting a Bridge Connection to get Cheaper International Calls

In our example, we have a Bridge connection to a REMOTE PBX in London in the United Kingdom. If the London PBX has its own gateway connected to the United Kingdom PSTN Network, we can take advantage of this, using 2 rules – one for calls to the UK dialled starting with “01144”: 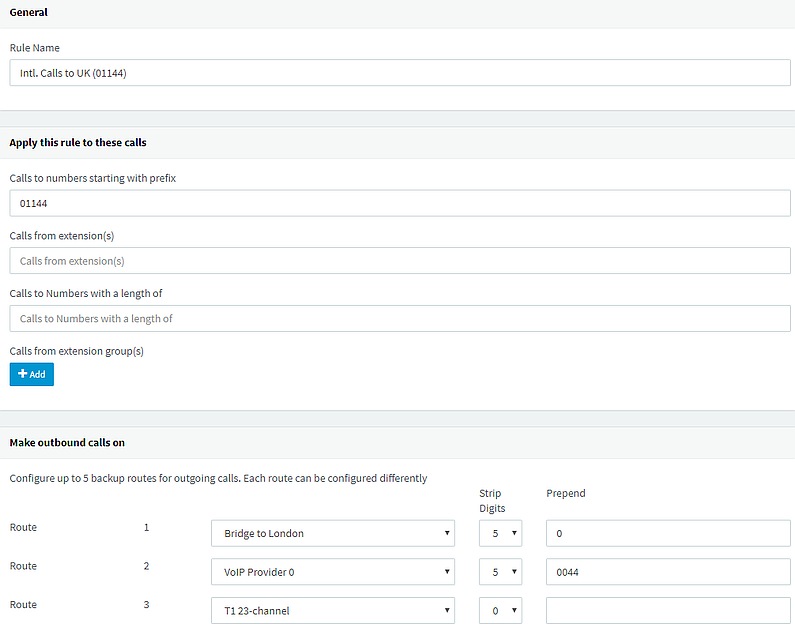 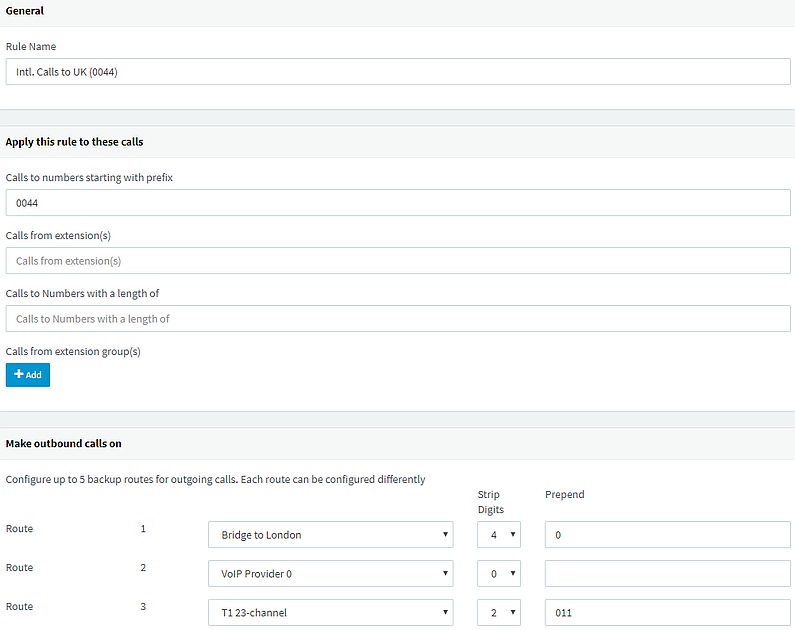 The Order in which Outbound Rules are Evaluated 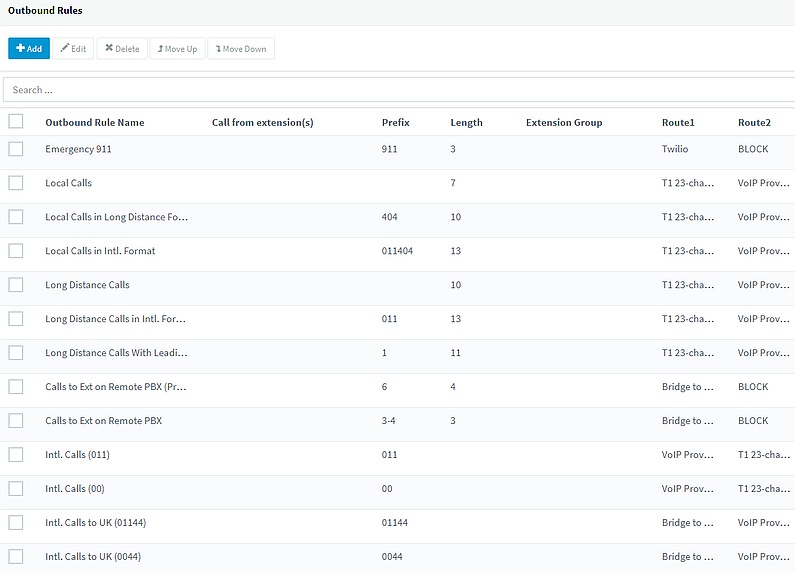 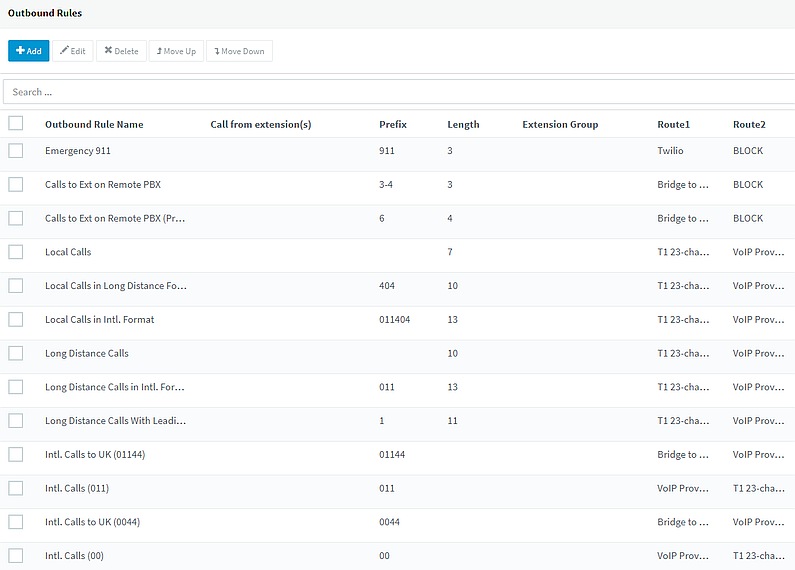